Former FC Barcelona star Patrik Andersson will have a special interest in tonight’s game between Copenhagen and Barça. The member of the FCB defence from 2001 to 2004 forecasts a 3-0 win for Barça.

Patrik Andersson, who lives just over the water in the Swedish town of Malmoe, connected to Denmark by a bridge, was there to watch his former team in training at the Parken Stadium .

Some of the squad are former team mates of his, including Puyol, Xavi and Iniesta, and Andersson was also willing to have a word with Barça TV and www.fcbarcelona.cat about the evening’s fixture. 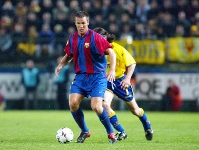 Patrik Andersson will be watching the game live, and when asked to predict the score, he went for a 3-0 win for Barça, who he is convinced are the better side, although “Santin and N’Doye are dangerous players”.

Like other players that have experience of Barça, Andersson only had praise for the club’s unique style. “I like it a lot” he said. “They’ve got lots of quality. They play fast and score goals”. A lot has happened to the Swede since he left Barcelona in the summer of 2004. “The Club has gone through a transition since then. Barça were unlucky with Zlatan, but I like them a lot with Villa. He scored two against Sevilla, and that’s good for his confidence”.

Andersson also spoke about Messi, saying that as a central defender himself, he would not fancy having to cope with the Argentine star. “He is in good form, playing well and scoring a lot of goals” he said. 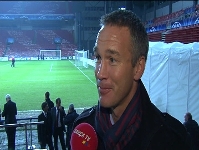