Training at the Parken Stadium

Training at the Parken Stadium

Barça trained at the Parken Stadium this evening ahead of tomorrow’s game in the midst of great media excitement.

The 19-man squad trained on the Copenhagen pitch and were well wrapped up against the cold with temperatures plummetting to 7ş in the Danish capital, as they mainly focussed on ball skills and possession.

There’s tremendous excitement in the Danish media at Barça’s arrival and the first 15 minutes, which were open to the press, saw a lot of Danish and other Scandinavian media outlets present.

One well known face at the training session was ex-player Patrick Andersson, who played for Barça between 2001 and 2004. The Swedish defender now lives in Malmo and took the opportunity to meet up with old team mates such as Puyol, Xavi and Iniesta. 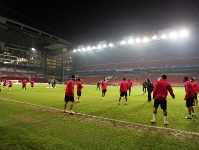