Leo Messi, Xavi Hernßndez and AndrÚs Iniesta have been named as the three finalists for the FIFA Balˇn de Oro 2010 award. Barša have made history with three home grown players in the top three spots.

Just as in 2009, the Balon De Oro will be coming to Barca, as the three Masia graduates took the three finalist spots in this year’s award announced at lunchtime today in an event in Paris. Ex France international Jean Pierre Papin read out the shortlist. 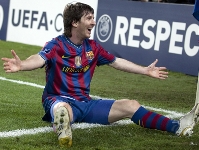 The final award ceremony will take place on January 19th in Zurich when the winner will be announced.

Following on from Sacchi’s Milan

Barša are the second club to get all three top spots in the award, following on from Arrigo Sacshi’s AC Milan who in 1998 were represented by Basten, Gullit and Rijkaard, with Basten, Baresi and Rijkaard repeating the feat the year after. 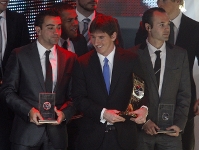 The last winner of both the Pilota d’Or and the FIFA World Player before they joined this season, was Leo Messi , Xavi and Iniesta were both finalists in both awards last year too. 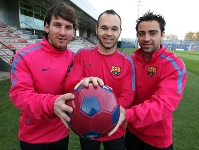 Before the top three were named, Barša had already made their mark as the team with most nominees –six (Puyol, Alves, Xavi, Iniesta, Messi and Villa)out of the 23 candidates.