Here you can see highlights of Leo Messi from 2010.

10 January: Hat-trick at (0-5). The third chipped goal is extraordinary.

17 March: Two goals against Stuttgart in the second leg of the last 16 of the Champions league (4-0).

21 March: Hat-trick at the Romareda, with probably his best goal of the season included (2-4).

6 April: Messi scores all four in Barça’s 4-1 demolition of Arsenal in the quarter final of the Champions League (4-1).

10 April: Opens the scoring at the Santiago Bernabéu. The 0-2 win send Barça back to the top of La Liga.

16 May: Two goals in the 4-0 win over Valladolid (4-0) which gives Barca the league title for the second season running. Messi is Spain’s and Europe’s leading scorer for the season.

21 August: Another hat-trick leads Barça to beat Seville 4-0 in the second leg of the Spanish Super Cup which the team take for the second year on the run.

19 September: Messi suffers an ankle injury in injury time at the Vicente Calderon against Atletico Madrid (1-2).

29 September: After a two-game lay off, he returns to face Rubin in Kazan.

24 November: Scores against Panathinaikos – his 10th game on the run scoring (9 with Barça and one with Argentina).

29 November: Sets up two goals for Villa in the historic 5-0 win over Madrid. 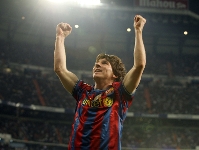