After Bojan put pen-to-paper on a contract extension with Barça, which will keep him at the club until 2015 and increase his buy-out clause from 80 to 100€ million, on Monday evening , he claimed: “I’m very happy and this gives me peace of mind".

As Pep Guardiola revealed this morning, the 20-year-old striker has added two more years onto his existing contract with the new agreement lasting until June 30, 2015. His buy-out clause will also increase from 80€ million to 100€ million. 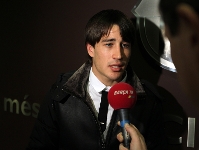 Bojan was unable to hide his emotion once the signing was done: “I’m very happy for the peace of mind this will give me and about the chance to continue growing at the club of my life. The really important thing is what happens on the pitch, but the fact that the club has given me such a long contract shows they have confidence in me”.

The challenge: “continue showing what I can do ” 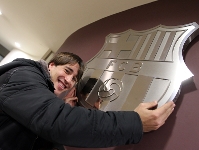 The new deal means Bojan will stay at the club at least until he’s 25 and he’s well aware of the many challenges he faces: “I hope things get better and I keep moving forwards so that I can show that I belong here and I am a valid option”.

Krkic, who joined Barça when he was 11, will sign the new contract at the club’s offices on Monday. The youngster has risen through the club’s ranks and is now in his fourth season with the first team and has appeared in 146 games and scored 38 goals.