Xavi Hernŕndez was a happy man in his press conference today at the Ciutat Esportiva. Well, he has good reason to be after participating in the amazing 5-0 win over Real Madrid.

FC Barcelona midfielder Xavi admitted he’d had trouble sleeping. It’s not every day you put five past Real Madrid and it was hard to come down from the clouds. Being a man with Barça in his DNA, he was as happy as happy could be, and said “I’m delighted to have made the Barça family happy”.

As Guardiola said last night, Xavi was happy with the way they won it. “We were the better side on the pitch from the first to last minute” he said. “It was a historic result, but especially because of such superiority”.

The 6-2 win at the Bernabéu last year is fresh on everybody’s memories, but Xavi actually thought that “although the result was more or less the same, we played even better last night … It was one of the best games of my life. We have done better in other games, but probably never in one quite so important”.

Talking on the pitch 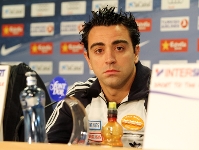 “In the build-up to the match we just wanted to ignore all the noise being made, we just wanted to do our talking on the pitch. Barça were vastly superior. In every way, every facet, we were better”, said Xavi. But he didn’t think they had a point to prove. “We’re just a team that loves to compete and to keep accepting challenges”.

Xavi agreed that it was “a big blow for Madrid, now we have to see if they can recover.” In turn, for his own team, he reckoned “it had the opposite effect. It was a huge boost for morale”. 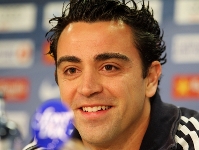 No thoughts of Ballon d’Or

Xavi Hernŕndez, with his goal last night, may have moved a step closer to being named the best footballer in the world. But he claims “I’m not thinking about that, I’m thinking about the good of the team.” That said, he didn’t deny that individual accolades are also fantastic to get.