Guardiola: “we are proud of how we did it”

Guardiola: “we are proud of how we did it”

Pep Guardiola was proud of his players’ performance at the Nou Camp on Monday night and claimed: “we had a good time tonight and that makes all our hard work worthwhile”.

Speaking to a packed press room after his team’s demolition of Real Madrid, Pep Guardiola expressed his satisfaction as he chalked up his fifth win against Madrid and explained that for him the key to the win was his insistence on maintaining the team’s trademark attacking identity.

Time to enjoy the win 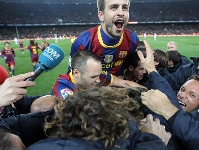 Pep Guardiola was happiest with “how we did it - that makes us proud. Now just let us sit back and enjoy that win - we’ll reflect and look at the whole game, but now it would be wrong not to revel in the win. Games like that happen very rarely indeed”.

Guardiola stressed that the win was very much in the Barça tradition:“Cruyff and Rexach were the first to get that way of playing started. That’s the track to take and those of us who have come after them must be loyal to that. It’s an idea that we shouldn’t betray – it has been implanted in this club for a long time now”. 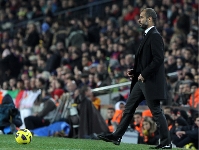 Despite his satisfaction though, Guardiola warned: “there are still a lot of games left to play in this league. We were the better team tonight, but both teams are at a very high level. We are only two points ahead and Real Madrid remain an impressive team”. 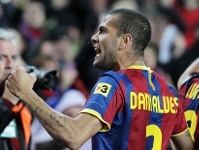 Guardiola paid particular praise to Messi and Alves. “Messi is the best of them all. In all aspects of his game he is just the best”. As to the Brazilian, the boss claimed: “he is an enormous help for the balance of the team. I hope we reach an agreement soon (on his new contract) – he’s better off here than anywhere else he could go to”.

The 5-0 win inevitably brought memories back of the famous 2-6 victory at the Bernabeu and Pep explained: “it’s a similar feeling now, because of the way we won, but that win meant we won the league and this one, well we are still in November. It produces the same feeling of satisfaction though”. Guardiola was also reminded of the 5-0 win under Cruyff, but he preferred to settle for the fact that: “we’ll remember this 29th November for the win over Madrid”. 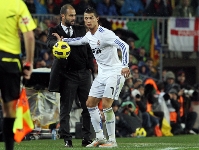 Bartomeu: “great present from the players”

Sporting Vice President Josep Maria Bartomeu also expressed his satisfaction after the win: “we are happy, all of us should be, with the way we played, for the result and for such an emphatic result. It’s a present from the players to celebrate our 111th anniversary –what a spectacle!”

Bartomeu confessed: “I can remember very few Barça-Madrid games with such a commitment and great play from the players. The fans also got behind the team just as the President has been asking them to all week”.

Josep Maria Bartomeu echoed the boss however: “this is really just one more game and the league has only just begun. It was important to beat a close rival and now we should just enjoy the win, before we turn our attention to the next game”.