There are many reasons why Barça can feel confident that the clásico is going to go there way. Here are ten.

- On Monday it’ll be 936 days since Madrid last beat Barça, on May 7, 2008. Since then, Barça have become the first team to win four clásicos in a row.

- In the last 27 league clásicos at the Camp Nou, Barça have won 18 times, drawing 7 tomes and only losing twice.

- José Mourinho has never won at the Camp Nou. He came here three times with Chelsea and twice with Inter, getting two draws and losing three times.

- Cristiano Ronaldo has not scored in five games against Barça. He faced FCB three times with Manchester United (including the final in Roma) and twice with Madrid.

- Leo Messi has scored in ten consecutive games, nine for Barça and one for Argentina.

- This is the best ever start to a league season under Guardiola, nine wins, one draw and one loss.

- The home side are flying up their own private ‘Tourmalet’ of home games. They have beaten Valencia (2-1), then Sevilla (5-0) and Vila-real (3-1). The stage ends against Madrid. 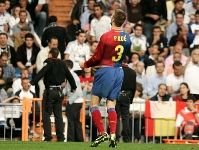