Messi is the kind of player who rises for games like the clásico. He’s the player who has scored the second most goals against Iker Casillas, 7 in 8 games, and he’ll be out to get more on Monday.

The only player to have scored more than goals against Casillas is another Barça player, Samuel Eto’o. Another curious stat is that only one keeper has suffered more at the feet of Messi than Madrid’s number one, and that’s Palop, who his beaten eight times.

Messi made his clásico debut in the 2005-06 season, under Frank Rijkaard at the Santiago Bernabéu. He made his mark with a dazzling run that was finished off by Eto’o. Ronaldinho scored the next two to make it 3-0. Messi missed the next match, which ended 1-1, though injury. 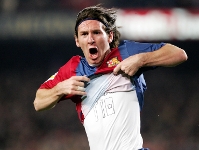 The first clásico of 2006-07 also saw Barça win away, this time 2-0, and Messi may not have scored, but played exquisitely. But he excelled himself in the return match at the Camp Nou, scoring all three goals for his team, although that wasn’t enough to avoid a 3-3 draw. It was a late Messi equaliser that saved Barça a point.

The 2007-08 clásicos were best forgotten from a Messi point of view, and for Barcelona in general. In the first encounter, Real Madrid won 1-0 at the Camp Nou, and Messi was on the sidelines after getting inured against Valencia. When they met again, Madrid were already league champions, and FCB went down 4-1 at the Bernabéu. FC Barcelona’s only goal was scored by Henry. 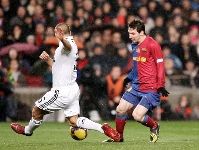 In the first clásico of the treble winning season, Eto’o opened the scoring late on. But there was still time for Messi to add another for Barça in the 89th minute with a cheeky chip over Casillas. In Madrid, a game would be produced that has gone down in club folklore. Messi scored two of his team’s amazing six goals, the third and fifth. The others came from Henry (2), Puyol and Piqué.

Last April, Messi scored yet another goal, with the second coming from Pedro in a 2-0 win at the Bernabéu to put Josep Guardiola’s side top of the table. They’d go on to win the title. Barça thus did the double over the old enemy, having already got the better of them in November, 1-0, thanks to a goal from Ibrahimovic. 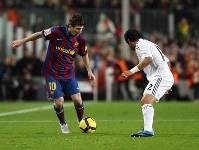 No goals against Mourinho

On Monday against Real Madrid, Messi will have another chance to break his duck against teams managed by Mourinho. In none of the games with any of Porto, Chelsea or Inter Milan has the Argentine found the target. In fact, it was in a friendly against Mourinho’s Porto on November 16, 2003, that Messi made his debut with the Barça first team.

In the 2006-07 season, he was outstanding at Stamford Bridge in the second round of the Champions League, where FC Barcelona won 2-1, although there were no Messi goals. The second leg at the Camp Nou ended 1-1, and was a nightmare for Messi. An injury suffered that day put an end to his season, and so he missed the Champions League final in Paris. Barça played Chelsea in the group stages the following year, 2006-07 (1-0 in England and 2-2 at the Camp Nou). Messi’s name was once again nowhere to be seen on the scoresheet.

Mourinho was next at Internazionale, who Messi faced three times, all last season, and once again failed to find the net. He played in one of the games in the group stage, which ended scoreless, and then in the two semi finals, which Barça lost 3-1 and won 1-0.