First session to focus on Monday

First session to focus on Monday

The squad had a gentle training session this evening after last night’s Champions League exertions. Only Valdes and Iniesta, who worked out in the gym, and the injured Milito were absent.

The rest of the players who figured last night were joined by the other squad members on Pitch Number One of the Ciutat Esportiva Joan Gamper in the first session for Guardiola to begin preparations for Monday’s big game.

Adriano worked on his own with a coach after feeling a twinge in his left calf during the game last night and coming off after 76 minutes. The Brazilian was examined by club doctors who decided that he had not done any damage and should be okay.

Valdés and Iniesta in the gym

Víctor Valdés and Andrés Iniesta didn’t come out for the session, preferring to work out in the gym, whilst Gaby Milito was also absent as he continued his recovery programme.

The three B team players Mińo, Fontŕs and Thiago who made the trip to Greece, completed the session, alongside Youth A team defender Ivan Balliu. 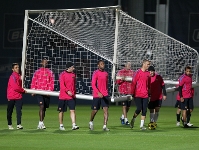 The squad will have a day off on Friday before reporting for training at 11-00 on Saturday morning. Training will be behind closed doors. Carles Puyol will hold a press conference after the session.