Mascherano: “the whole world stops for this game”

Mascherano: “the whole world stops for this game”

Javier Mascherano reckons it’s a privilege to be able to live through a game like Monday’s El Clasico. The Barça midfielder believes there are no favourites in the game, with both teams playing well.

“The whole world stops for this game and we are lucky enough to be taking part in it” insisted the Argentinean when he spoke to the media after Thursday evening’s training session. “I don’t know if it’s the most important meeting between the two in recent years, but I know we will be going out to represent the club with the whole world watching us”. 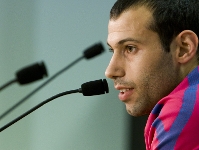 Mascherano has been through plenty of other derbies with past teams and he knows that these games are something special: “I’m one of those people who believe that form doesn’t count for games like these. Playing at home with our fans behind us will give us an edge, but we know we are facing a great team who are doing things really well”.

The Argentinean didn’t hold back on his praise for Madrid, claiming: “it’s not an accident that they are at the top of the table. They have some great players with a lot of quality in the middle and up front and with a lot of ability to get forward”. He refused to get drawn into comparing the two teams’ stars, Messi and Ronaldo, but he did state: “Messi is a step above all other players, but that’s just my opinion after playing with him and knowing him, working with him every day. Both are great players and I can understand that some people think the Portuguese player is the better”. 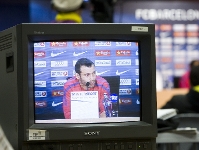 Mascherano come into the game on something of a high as his adaptation to the Club and the Barça style continues apace and he believes: “every day I feel better. I feel more comfortable and closer to the level I reached with other teams. I’ve never played 4-3-3 so often and that has meant that even though I’m playing in my usual position, my role is slightly different. Fortunately, my teammates and the coach are helping me to learn all the time”.

Mascherano reckons that the trademark style of play that Barça have is the most important aspect of the club, even more so than results: “we have a trademark style and they never swerve from their way of playing. It’s a different team from any other. It’s not an easy way, but it’s the first club I’ve ever been at where they treat the game like this”. 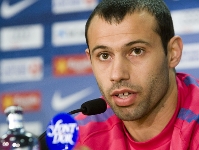 Mascherano is not a guy who likes to show off and even though he was a fixture in the Liverpool team and is the captain of Argentina, he readily accepts his role as a member of the squad and insists: “ just because I’ve started a couple of games means nothing. Sergio (Busquets) is first choice for everything he’s done over the years and all I do is try and help the team as much as I can so that we don’t notice it when such an important player as he is is out”.