Adriano pleased to play and win

Adriano pleased to play and win

Adriano was pleased to be given a chance to continue his adaption to life at FC Barcelona after being named in the starting team that beat Panathinaikos in the Champions League on Wednesday evening.

“It is important to play and even more so in the league,” he said after a convincing display. The Brazilian was a surprise inclusion in the side that coach Pep Guardiola named, but he proved to be a great choice as he helped the team to clinch top spot in the group. 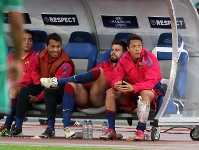 In both halves of the game Adriano had almost identical chances to score but was denied by Alexandros Tzorvas in the Pana goal, but he did set up Lionel Messi for his goal. “In the first half I tried to surprise the keeper,” Adriano explained. “I am just happy to play though. It is important for me to play and even more so in the Champions League as everyone wants to play in the important games.”

Barça completed their aim of finishing first in the group and Adriano recognised that was always the aim. “That is what we wanted,” he commented. “It is what we thought about and we knew that we had to go out and be at 100 per cent from the start.”

Below is what some of the players had to say after the game: 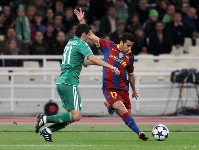 “We are pleased because it was a difficult place to come. I am happy with the goals and the win.”

“I thought we created good things, above all Leo’s (Messi) goal. We controlled the play from start to finish.”

“We had to win away from home and even more by playing like this.”

“We are all excited by el clásico. Now we can start to think about Madrid. We hope to be able to take all the points at Camp Nou.”

“I am pleased for the team, for the fact we won and that we have qualified. We wanted to finish in first place.”

“Apart from the result this team always wants to play in the same way because that is what we know. It is the special style that represents the club.”
“I have played the last two games in the starting side, but it is nothing. Sergio is a great player and he is the first choice. When I am called I aim to do my best and to ensure that his absence is not noticed.”

“We have to cherish Messi because it will be many years before we see a player like of his magnitude again. He will be historic.”

“We hope to follow this by winning el clásico because that is important. But it is three points and we cannot drive ourselves mad. We should intend to remain calm. The game is on Monday and not before.”

“Now we can think about el clásico. It is an important game and we are favourites because we are at home.”

“We are in good form and we have played well.” 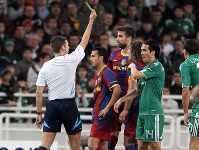 “I never think about sendings off and aim to reach the next stage cleanly.”

“To come here with their fans is always difficult but we have done well.”

“In think we are at a good level. The team has a lot of confidence and we are going to be at home. The conditions are optimal.” 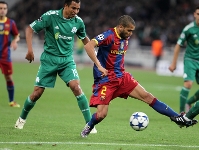 “Now we have one last game at home to finish this tough and difficult job.”

“I am happy to help the team. The assist means nothing if Pedro does not hit it well.” 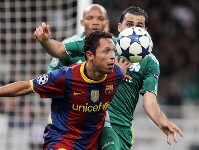 Barça will train on Thursday afternoon at 18:00 in a session behind closed doors. Beforehand, Javier Mascherano will attend a press conference. Originally, the coaching staff were to give the players the day off.