FC Barcelona landed in Hellenic climes at midday today, and on their first visit to the Greek capital in five years, the objective is to secure second round qualification.

The 20 players Guardiola has taken to face Panathinaikos on Wednesday night were welcomed by warm 22 degree temperatures.

Rosell at the helm

The squad are also being joined by president, Sandro Rosell, as well as the vice president for the Sports Area, Josep Maria Bartomeu, directors Carles Vilarrubí, Pilar Guinovart, Ramon Pont and Silvio Elías and the sports director for professional football, Andoni Zubizarreta, who spoke to the press shortly before taking the flight. Some 60 supporters were among the 185 passengers on board.

The Barça players are taking with them a new tracksuit featuring yellow tops and black bottoms.

The players will train at the match venue, the OAKA, at 19.30 local time. Three quarters of an hour before that, Josep Guardiola and midfielder Sergio Busquets will be talking to the press. 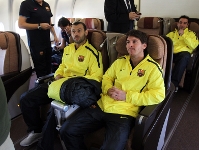 The last time Barcelona were in Greece was October 18, 2005, for the third match in the UCL group stages, and also with Panathinaikos as the opposition. The game ended 0-0. Only five of the team that night are still at FCB, namely Valdés, Xavi, Puyol, Iniesta and Messi. That was the season that Barça went on to claim their second Champions League in Paris.