Andoni Zubizarreta has said that the Champions League is Barça’s priority this season, and for that reason does not think the forthcoming clásico will condition their performance in Greece on Wednesday.

Moments before boarding his flight, sports director Zubizarreta spoke to the media about the game with Panathinaikos. “The Champions League is a vital part of the year for us, and so this game is very important for qualification, finishing top and everything that happens later in this competition” he said. 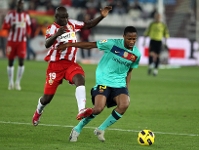 Zubi doesn’t think the players’ minds are currently distracted by next Monday night. “This team never reserves forces. They like competing, measuring up and challenging … They are very good at focusing on the important aims. The game with Almeria was a good example, if you don’t get caught napping in the League then it’s hard for that to happen in the Champions League”.

He added that “I can’t deny that we’ve been waiting for that game ever since the start of the season, but the clásico would mean nothing without all the other matches”.

Zubizarreta and the team’s first objective is Panathinaikos, who have recently changed manager. “Whenever we go to Greece we expect highly competitive teams, and a lot of noise and pressure from the stands. I don’t know if we’ll get that, but it’s what we’re expecting … We have the utmost respect for an important ground and a great, historic team, with good, experienced players”. 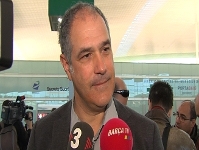 Andoni Zubizarreta is going back to the stadium where he played his last ever game for Barça: the Champions League 1993/94 final against Milan, which they lost 4-0. “I have fond memories, but not of the result … and the return journey wasn’t nice”, he laughed. It was on the flight that he was told that his services were no longer required by the club. “I hope all those ills have been cured”.