Josep Guardiola has called up 20 players for the trip to Greece to face Panathinaikos on Wednesday.

The suspended Pinto and injured Milito both miss out, but Abidal, still not passed fully fit, and B team players Mińo, Thiago and Fontŕs all make the trip. 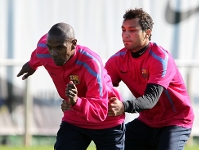 The players worked out with the Champions League official ball at the Ciutat Esportiva this morning in the final session before the trip to Greece tomorrow. Guardiola named his squad for the game with only Abidal, who missed the Almeria game, a doubt and with two of the 20-man party set to sit the game out as UEFA rules only allow 18 players for each game.

Jeffren back in the frame

Almost a month after his last call up, Jeffren Suárez is back in the squad after fully recovering from the back injury he picked up in the first leg of the Ceuta Cup tie.

Milito only player to miss training

The B team players Mińo, Thiago, Fontŕs, Dos Santos, Riverola, Planas and Ilie joined in with the 18 available first team squad members, as Abidal trained with the rest of the group, although he has not yet been given the medical thumbs up to play, whilst Milito is still recovering from his injury and was not at the session. 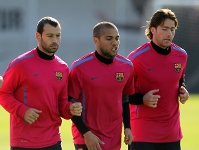 Squad to travel to Greece