Barca’s game in Almeria on Saturday night is sandwiched between two mouth watering games, with third and fourth meeting in Mestalla at six and Madrid taking on Bilbao in the Bernabeu at ten o’clock.

There’s also plenty of interest in the bottom half, with Deportivo and Malaga, Llevante and Racing and Osasuna and Sporting all facing each other in what could prove to be vital games come the end of the season. Zaragoza’s new boss Javier Aguirre will have to wait till Monday for his first game in charge when his team travel to Getafe.
Battle for third place at El Madrigal
Valencia’s fans will be hoping that their win last week has put an end to a terrible run of results and they will have the chance to re-establish themselves in third spot if they can beat Villarreal at El Madrigal in Saturday’s opener. Emery is sweating on the fitness of Cesar, Mata and Mathieu, whilst Albelda is suspended and definitely misses the game. In contrast, Villarreal have a full squad and with five wins out of five and just a single goal conceded at home so far this season, they will be confident of seeing off one of their main rivals in the fight to challenge the big two.

Real Madrid also have a 100% home record this season, which will no doubt be put to the test a week before El Classico by the visit of Athletic Bilbao, who despite not winning at the Bernabeu since 2006, always pose a threat with their bustling direct style and with Llorente seemingly scoring at will and their morale still high from last week’s heroics against Almeria the Basques will be hoping to upset the form book - Bilbao have lost their last three away games – by taking something away from the Spanish capital.

Espanyol are the other La Liga team who’ve won every game at home this season and on Sunday they may have the chance to get back into the top four if they can extend that record against Hercules, who of course already know what it is to win in Barcelona this season! Seville are a point behind Espanyol on 19 and could also be back in the Champions League spots if they beat Mallorca at the Sanchez Pijuan and strech their run of four wins in all competitions since they were hammered at the Nou Camp. Manzano will be without the injured Capel, but Palop returns in goal. Mallorca have beaten Valencia and drawn with Barça and Madrid this season and their winger Emilio Nsue warned Seville: “we always do well against the big boys and with our style of play I think we will hurt Seville”.

Atletico Madrid(17 points) and Real Sociedad(16) could take advantage of any slip up by Espanyol or Seville and the two meet at Anoeta on Sunday night. Ex Espanyol captain Raul Tamudo is fit again and available for Real and he warned Atletico that “if they want to win here, they’ll have to do a lot of running and work really hard. Forlan and Kun were back on target last week, but our defenders are ready for them”.

Deportivo are unbeaten in their last five games in all competitions and the 7 points they’ve taken from their last three league games have hauled them up out of the relegation places. Over the next three weeks they face Malaga, Racing and Hercules in three games that could define the rest of their season and on Sunday they kick off against Pellegrini’s Malaga at the Riazor and veteran defender Manel Pablo explained: “we’ve got our confidence back and everything is going better, but we have to keep taking points because we are still in the danger zone –these home games are important to make up the points we dropped earlier in the season”.

Points will also be at a premium in the game between second from bottom Levante and Racing Santander, whose boss Miguel Angel Portugal has demanded his players take all six points from the visit to Valencia and next week’s game against Deportivo. Finally, eighth placed Osasuna, who are still unbeaten in Pamplona this season, will look to take the points against fourth from bottom Sporting and put some space between themselves and the teams below them ahead of a tough run of games that sees them visit Bilbao and Valencia and receive the visit of Barça. 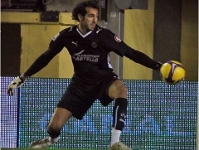 Gay pride intact despite the sack

Zaragoza’s centre back Jarosik’s terrible mistake let in Negredo to score a last minute winner for Seville last week and the Zaragoza board reacted by ..... sacking the manager. Jose Aurelio Gay reflected on his dismissal telling reporters: “I’m proud of what I did here, but it’s an ungrateful thing to do to sack me. That’s the way it is in Spain now, you don’t get the results and you are out”. Zaragoza appointed ex-Osasuna, Atletico Madrid and Mexico boss Javier Aguirre to take over from Gay and he starts with a trip to Getafe on Monday.