There are several international friendlies on Wednesday night involving as many as 13 different Barça players. The attractions include Brazil v Argentina, Portugal v Spain and England v France.

There really are some great games to enjoy this evening, and many of them have an FC Barcelona flavour. 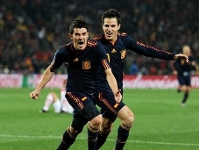 In the Stadium of Light in Lisbon at 22.00, there’s the Iberian derby between Portugal and Spain, which will feature no fewer than eight FCB players. The host nation will be keen to gets its revenge on Vicente del Bosque after going out of the World Cup in South African to Spain in a 1-0 defeat, with the goal coming from then future Barcelona player Villa.

Barcelona have their usual eight players in the Spanish squad: Valdés, Villa, Puyol, Piqué, Busquets, Xavi, Iniesta and Pedro. But Pedro has gone down with acute gastroenteritis and probably won’t be any condition to play. 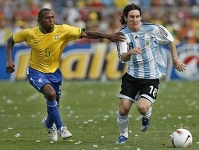 One of the big attractions of the day is the game in Doha (Qatar) between Latin rivals Brazil and Argentina (18.00). Messi once again meets his old friend Ronaldinho, who has been called up anew for the ‘canarinha’. The two players already faced each other at club level earlier this season in the Joan Gamper Trophy. Other FCB players on the pitch will be Mascherano, with Argentina, and Alves and Adriano, with Brazil. 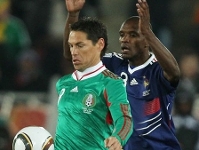 Wembley is the venue tonight at 21.00 for the game between England and France. Both sides are out of form and in transition following disappointing World Cups, but this is always going to a great game. There will also be FC Barcelona presence in London in the form of Abidal in Laurent Blanc’s side, who returns after not being called up for the last game. 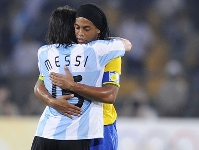 Ibrahim Afellay has been the subject of headlines this week after the announcement of an agreement for him to join Barça. Tonight at 20.30 the future FC Barcelona man will be on show at the Amsterdam Arena against Turkey.