There were just five first-team players available for training due to the international call-ups as the squad were called back after a two-day break on Tuesday and they were joined by six youth team hopefuls.

Pep Guardiola oversaw the session as he worked without the majority of his players because 13 Blaugrana stars have jetted off to team up with their national team squads for the round of qualifiers and friendlies set to take place in midweek. 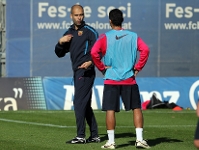 After a well-deserved break José Manuel Pinto, Maxwell, Bojan Krkic, Seydou Keita and Jeffren were all present. Jeffren was able to train with the squad despite the fact that he has yet to be given the green light to play again after suffering a shoulder injury in the Copa del Rey tie against Ceuta. Oier Olazábal, Carles Planas, Andreu Fontŕs, Thiago Alcántara, Ilie Sánchez and Benja Martínez stepped up from the cantera to bulk up the numbers.

Gaby Milito was in the Ciutat Esportiva Joan Gamper complex too as he worked on recovering from the leg injury he suffered recently. 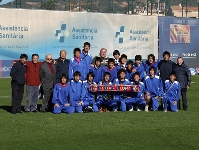 A group of students from the Japanese Nihon Kougakuin school, which is linked to J-League side Yokohama Marinos, visited and watched Barça train. The youngsters are staying at the CAR in Sant Cugat and were keen to watch the Blaugrana close up. Carles Rexach and Tońo de la Cruz, who coached Yokohama in the 1990's, guided the group. 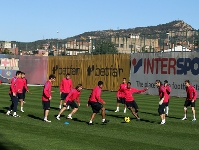 Panathinaikos have sacked head coach Nikos Nioplias with the club lying second in the Greek top flight. Barça's next opponents in the Champions League have only garnered two points from their European exploits in Group D. Jacek Gmoch has taken over on a temporary basis and the club are now looking for a new trainer to take the reins.