Barça’s goals this season have so far come from 14 different players, compared with 9 last season and 11 the year before at the same stage of the campaign.

Lionel Messi is scoring more goals than ever before with 19 of the team’s 43 so far, but behind him, the goal scoring duties are being more widely spread than ever.

All the team’s defenders, except Adriano and Abidal have found the back of the net so far this season with Alves, Piqué, Milito, Maxwell and Puyol on target compared with just Alves and Piqué in 09/10 and in 08/09 Alves and Márquez.

Two seasons ago, Xavi had already scored 6 times and last year it was Keita who’d bagged a half dozen, whereas no midfielder has scored more than twice this year, with Mascherano the only man in the middle without a goal. 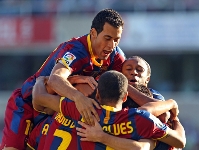 With 6 goals from the defence and 5 from midfield, it’s been the attack who’ve been doing their job and scoring, with 32 goals between them. Only Jeffren, who has been out for much of the time with two injuries, has failed to score, with even B team striker Nolito getting on the scoresheet. 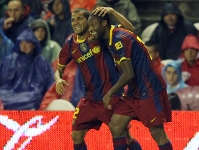