With all eyes on the Nou Camp for the big game between Barça and Villarreal tonight, the fight for the European spots and to scramble away from the bottom places continues as La Liga goes into its 11th round of games this weekend.

There are just three games on Saturday, with Real Madrid, Espanyol, Valencia and Seville all playing on Sunday, as are Zaragoza, Deportivo and Llevante at the bottom.

Almeria kick off the action in Bilbao at six on Saturday, with the Basques needing to put last week’s thrashing at Villarreal behind them. Almeria are due at the Nou Camp next week and they could well turn up in the bottom three if they can take nothing away from San Mames. Juan Manuel Lillo’s team have actually lost fewer games than Bilbao -three to the Basques’ five this season, but their six draws have meant they’ve won just one game and sit just a point above the drop zone.

Osasuna travel to Atletico Madrid for the next game on Saturday and despite their Cup defeat midweek to Deportivo, Camacho’s team, who’ve yet to win on the road, know that a win in the Vicente Calderon would take them above their hosts. Atletico themselves have slumped of late, with no win in their last three league games and were disappointing in their midweek Cup draw with Universidad Las Palmas. The goals have also dried up for Diego Forlan, who’s gone twelve game s without finding the net.

Sporting manager Manolo Preciado has heated up the atmosphere before Madrid’s visit on Sunday, claiming Mourinho is “a swine” if he thinks Sporting handed Barça the win when they met at the Nou Camp earlier this season. Madrid will be at full strength for the game, though without Mourinho himself, who will serve the first of the two game ban he was given for the sending off against Murcia midweek. Madrid haven’t lost at the Molinon since the 94/95 season and haven’t conceded a goal on their last five visits.

Espanyol on the up

Espanyol saw off Valladolid in the cup in midweek, whilst Racing, who they play in Santander, were eliminated by second division Cordoba. This looks like an ideal chance for Pochettino’s men to cement their challenge for a Champions League spot, whilst their hosts will want to avoid getting dragged further down into the relegation spots. Behind Espanyol, Valencia must be wishing the last month or so of league action had never happened, having taken just one point from their last four games and with trips to Villarreal and Real Madrid coming up they desperately need a win at home to Getafe on Sunday.

Seville saw off Valencia last week and have won all three of their home games to draw level with Emery’s team and following their emphatic 6-1 Cup win over Irun, they travel to Zaragoza on Sunday. Zaragoza won their first league game of the season last week, but were knocked out of the Cup by Betis in midweek, and a win against Seville could finally lift them out of the bottom three. Deportivo have lost just once in their last six games in all competitions, but face a tough trip to Mallorca, who’ll be determined to show that they can bounce back from the defeat in Zaragoza. Finally, Real Sociedad could find themselves in the top four if results go right and if they can beat Hercules in Alicante. 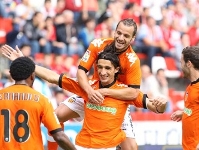 Two of the bottom three, Malaga and Levante, meet in the Rosaleda, with Pellegrini buoyed by his debut win in the 3-2 cup midweek victory over Hercules. Levante themselves scraped through to the next round against Xerez, despite losing 1-2 on the night.