Guardiola: “It will be a very good game”

Because of the way FC Barcelona and Vila-real are playing, Josep Guardiola expects a good game on Saturday night. He has been impressed with what he’s seen of Garrido’s third place outfit.

He said “Vila-real is the team we have found the most difficult in recent seasons. They are a very settled team, and have a recognisable style for many years. They have been playing like this for a long time and they are generally a very good side”. Guardiola is convinced that it will be an enjoyable match for the people that come on Saturday night. 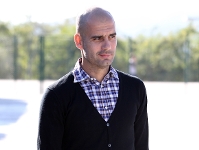 Why are Vila-real third? “They have a good goalkeeper. Marchena has added valued experience to the backline, and they have good midfielders. They have depth outside and skill inside, and when a team has such a strong set of midfielders, it associates well. And they have two great strikers in Rossi and Nilmar, they’re very quick and skilful”.

“I don’t like looking at these kinds of things, but statistics show that they have not lost at the Camp Nou for three years”, said Guardiola. No other team has gone the last three years without losing at Barcelona’s stadium.

Who will join Puyol?

The biggest question at the moment is Puyol’s partner in the middle of defence. Piqué and Milito, suspended and injured respectively, will miss the game and either Abidal or a player from Barça B look set to fill in.

The manager spoke about Bartra and Fontŕs’ chances: “One is right-footed and the other left, and they both have plenty of character. Bartra is more explosive, but Andreu is great at getting the ball out and very efficient in the two on one. Both of them cover a lot of ground and are good in the air. I think they’re both ready”. 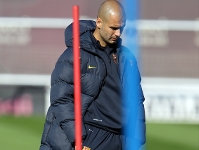 Josep Guardiola spoke about Carles Puyol’s 500 first team appearances, a figure he looks set to make on Saturday night. “Everything he had when he debuted under Van Gaal is still with him. He is always the man who puts the most effort into training. He is the captain and has shown that through facts. Tomorrow’s his 500th game and he should be congratulated. He has to be ready both physically and psychologically, which is not easy at a club like this, to survive so many years. But he looks after himself and trains well, and has plenty more years in him”.