The FC Barcelona players not included in the squad for the Copa del Rey encounter rose early on Wednesday morning and headed to the Ciutat Esportiva for training.

Seven first team players were joined by six others from the youth ranks as Gerard Piqué, Dani Alves, Sergio Busquets, Xavi, Andrés Iniesta and David Villa worked along with the recovering Jeffren Suárez.

Rubén Mińo, Oier Olazábal, Edu Oriol and Cristian Tello stepped up from the B side while Rafa Alcántara and Gerard Deulofeu were promoted from the Juvenil A team.

Pep Guardiola’s assistant Tito Vilanova oversaw the session and put the players through the usual warm-up and circuit routines before playing a game of seven against six on a small pitch. The training lasted just over an hour. 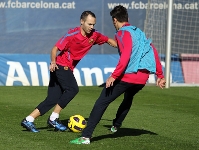