17 players have been picked for the cup second leg. Twelve are from the first team and five from the reserves.

After a Monday session in which the Barça players recovered from the exertions of the game away to Getafe, today’s training at Sant Joan Despí was more about the cup match on Wednesday. Seven men were allowed the day off, namely Dani Alves, Carles Puyol, Sergio Busquets, Xavi Hernández, Andrés Iniesta, David Villa and Leo Messi.

Seventeen on the field 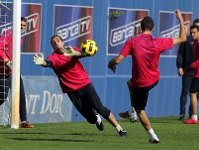 Along absent from the Ciutat Esportiva Joan Gamper were Víctor Valdés and Gerard Piqué, who worked out in the gym, meaning there were seventeen on the pitch, ten from the first team and six from Barça B. But one of these, the injured Jeffren Suárez, worked in isolation with a fitness coach.

The six reserve players were Jordi Masip, Marc Bartra, Thiago Alcántara, Sergi Roberto, Dos Santos and Nolito. Five of these already trained with the first team on Monday, but this time Rubén Mińo was replaced by Masip.

They started work at 11.00 and the session was entirely focused on the Copa del Rey encounter with Ceuta at the Camp Nou on Wednesday (22.00). 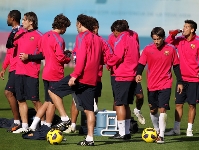 Wednesday at the Camp Nou

The last session before playing Ceuta will be on Wednesday at the Camp Nou. It will be held from 12.00 behind closed doors.