Guardiola one victory away from 100

Guardiola one victory away from 100

Barça could record their 100th win under Pep Guardiola on Wednesday when they take on Ceuta in the Spanish Cup. The win against Getafe on Sunday was the 99th since Guardiola took over in the summer of 2008, a figure that represents a 71% win rate ove

Guardiola always insists that the team have to take it one game at a time and that attitude has seen him win 99 matches and take a total of eight titles in just over two years . 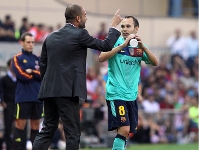 The win against Getafe was Guardiola’s 138th game in charge of the team over six different competitions, in which he’s recorded a 71,73% success rate, with 18,84 % of the games drawn and just 9,4% ending in defeat. 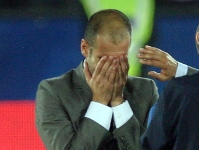 Those wins have of course helped to win titles and Guardiola’s team have so far lifted eight, but for each of those titles, there has to be a special game we all remember. 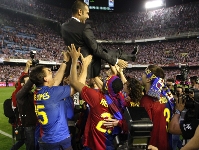 In the league it’s probably the 2-6 win at the Bernabeu that the team achieved on May 2nd 2009, whilst the Rome final of the Champions League, or maybe Iniesta’s heroics at Stamford Bridge in the semi finals are what most stick in the fans’ memory. Then there is the 4-1 win in the Spanish Cup Final in Valencia against Bilbao, or Pedro’s goal in the Super Cup, or the World Club Cup........

Leo and Pep, the perfect combination 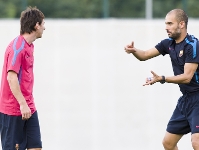 And if the team are on the brink of a century of wins under the boss, it must be down in a large part to the contribution of Leo Messi, who with his 100th goal under Guardiola, which he scored against Copenhagen, sealed the great combination between the two that has proved such a success story for the club. 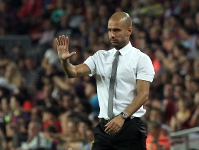