Following the hard won win over Getafe, the squad were back in training this morning behind closed doors at the Ciutat Esportiva as they prepared for Wednesday’s Cup game against Ceuta.

As usual on a day after a game, the session was quite gentle, with the stress on recovering from the strains of the Getafe match.

Xavi in the gym

Of the 18-man squad, only Xavi didn’t come out onto the training pitch, preferring to stay in the gym, whilst Jeffren continued his recovery from his back injury and worked apart from the rest of the group with his own trainer.

Six youngsters from the B team- keeper Rubén Mińo, Jonathan dos Santos, Thiago Alcántara, Marc Bartra, Sergi Roberto and Nolito also took part in the session, which began with some warm up and ball control work. 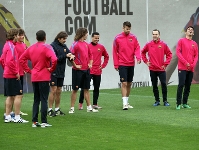 The squad will train again at 11.00 on Tuesday morning, after which Guardiola will speak to the press. The boss has scheduled another session for Wednesday lunchtime ahead of the Ceuta game.