With just two games being played on Saturday, most of the interest will be centred on the Spanish capital on Sunday where Real host Atletico in the first Madrid derby of the season, while just down the road Getafe welcome Barça in Getafe

On Saturday, Real Sociedad take on Racing Santander in confident mood after securing all six points from their last two home league games without conceding a goal. They’ll be further buoyed by Racing’s poor showing in their last two away games – two defeats and a total of eight goals conceded. Meanwhile, in the day’s other game, a win for Espanyol at home to Malaga would see the Barcelona club move, temporarily at least, into the top four. Malaga will be hoping that the appointment of a new manager – former Real Madrid boss Pellegrini – will inspire the kind of performance the Andalus club needs to climb out of the bottom three.

Another of Pellegrini’s former clubs, Villarreal, will need to overcome the disappointment of a midweek Europa League defeat in Greece and take the three points at home to Athletic Club if they are to stay in touch with the big two. Despite the setback in Europe, Villarreal will not surrender their 100% home league record easily.
First big league test for Real

The last few weeks have brought a mixed bag of results for Atletico Madrid, with three wins and plenty of goals in the Europa League and the Kings Cup but just fours points from their last four league matches. They make the short trip across town to the Bernabeu to test a Real Madrid side that has not yet had to face any of La Liga’s big guns, and narrowly avoided defeat on Wednesday in Milan with a goal in injury time. However, Atletico haven’t tasted victory against their fierce local rivals since the days of Claudio Ranieri and Jimmy Floyd Hasselbaink over a decade ago.

Bottom club Zaragoza – the only team yet to win a league game this season - desperately need the points to avoid becoming detached at the foot of the La Liga table. However, visitors Mallorca – who have suffered just four defeats in their last thirteen visits to the capital of Aragon - have won their last three matches and could find themselves in the top six if they take all three points in La Romareda.
Two more teams struggling at this early stage of the season meet in Valencia where Levante (8 points) receive Deportivo (7 points).

Almeria are at home to Sporting while Hercules travel to Pamplona to face Osasuna. Almeria boss, Juanma Lillo told the fans on Friday that he was hoping his players would produce the first home league win of the season, telling reporters: “The fans want to see their team win!”

Finally, week ten wraps up with the match between Sevilla and Valencia in the Sanchez Pizjuan. After a storming start to the campaign, Valencia have drifted off the pace in recent weeks and risk losing touch with the front runners. Bwhich Sevilla will they find? The one that conceded five last weekend against Barça? Or the one that went top of their Europa League group with a 4-0 win against FC Karpaty earlier this week? 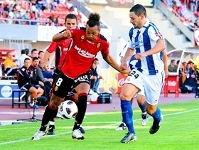