Speaking to the media this lunchtime, Gerard Piqué was adamant that Barça’s style of play is something that the team have to stick with, insisting: “we’ll will play like this till we die!”.

Barça’s style is universally admired in the footballing world and Piqué made it clear that there was no intention of moving away from the emphasis on entertaining and attacking: “we don’t know how to play in any other way and it’s done us pretty well so far”. 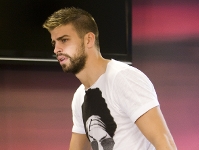 The Barça defender believes that the team are getting better with every game and despite the draw in Denmark, Piqué believes: “we are getting more solid at the back and scoring more goals up front. We are on the right track, but we have to keep on getting better, there are still a lot of things to improve, but I’m sure we will be 100% for the Madrid game”. 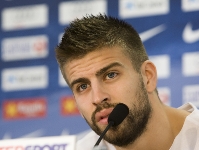 It’s going to be a busy week at the end of November, with the trip to Panathinaikos, where the team will be looking to qualify for the next round of the Champions League, and the visit of Real Madrid to the Nou Camp. Piqué doesn’t think that a win in Copenhagen on Tuesday would have allowed the team to approach the Madrid game in a more relaxed frame of mind though, explaining: “even had we won, the top spot in the group would still be up for grabs and we would have had to go to Greece equally committed”.

Piqué also believes: “it won’t be the decisive week of the season” and insisted: “right now I’m focussed on Getafe and the return game against Ceuta. That’s how we have to look at things, taking it one game at a time”.

Praise for Fontŕs and Bartra

Piqué praised the way Fontŕs and Bartra performed in Ceuta: “they played a great match” and he recalled his time at Manchester United when he was a youngster on the fringes of the first team and often played in Cup games: “it’s hard, because the regulars aren’t playing and the grounds you travel to are tough and your opponents really motivated. Even with all those things against them though, the two put in a great performance”. 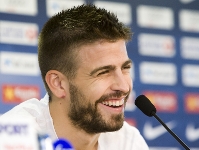 Gerard Piqué also referred to Xavi and his problems with his Achilles heel: “he’s not 100% and that’s why we have to treat him very carefully and look after him –he’s a vital part of our team”.

Finally, Piqué claimed to know nothing of the rumours concerning Xavi’s possible retirement from the international game: “I’ve heard nothing about it - I can’t imagine a Spain team without him”.