Barça were not alone on a cold night in Copenhagen. Some 2,000 FC Barcelona fans and members were in the Parken Stadium to see them draw on Danish soil.

Barça fans from Poland, Hungary, Sweden, Norway, Denmark, Germany and Belgium, and not forgetting Catalans and Spaniards, were in the Danish capital to cheer on Guardiola and his men. In total, there were some 2,000 Barça supporters in the stands.

Fans from all around 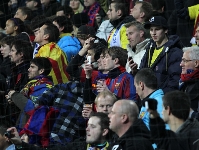 It was amazing just how many different nationalities were there to show their support for Barça. The largest community was almost certainly from Poland, whose Penya Polska alone sent some 100 fans. Barça also have a huge support base in Denmark, and some 300 locals were decked out in the club’s colours. Even before the game, the passion could be sensed by the enormous expectations among the crowds gathering outside the team hotel.

40 fans with the team

On Monday morning, the Barcelona expedition flew out with some 40 fans on board for Copenhagen. These formed part of a group of some 100 fans that travelled to Denmark from different parts of Spain. 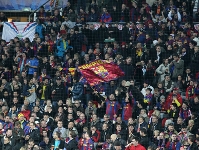 The two other sides in the group met earlier on in the day at 18.30. For the second time this season, a game between Rubin Kazan and Panathinaikos ended with no score.