The Barça party arrive in Russia this Monday at 20.20 local time (18.20 Catalan time), after a five hour flight to find the Kazan city enjoying 15ş temperatures.

The squad were whisked off to their hotel on arrival and tomorrow will see them go through a busy afternoon with Pep Guardiola and Gerard Piqué facing the press at 18.15, before the squad trains at the Centralny Stadium, where the game will be played on Wednesday. 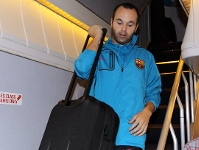