The first examinations by Barca’s medical team suggest that Leo Messi has suffered ligament damage to his right ankle, but there is no evidence of a broken bone. More tests will be carried out on Monday to assess the full extent of the injury.

The dramatic images of the world’s best player clearly in great pain being stretchered off after a vicious 92nd minute foul by Ujfalusi, who received a straight red, were quickly followed by initial medical explorations that showed ligament damage in the Argentinean’s right ankle, but no apparent break, as many fans watching the game must have feared. 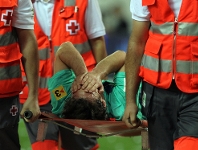 Pep Guardiola spoke of his star’s injury after the game: “he’ll be having more tests tomorrow, but in principle a break has been ruled out. He’s injured and the doctors will tell us how he is. Let’s hope the first diagnosis is correct and we can help get him fit again. He’s very said and in tears. These things happen in football”.

Guardiola was tight lipped about Ujfalusi’s foul and called on reporters to show responsibility: “the pictures of the incident speak for themselves I imagine. I’d ask you to show responsibility about these kinds of things. This isn’t something new, it’s been going on for a while – look, if there is proof and it looks suspicious...”. 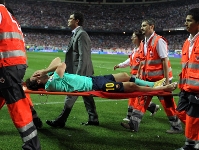