FC Barcelona and Liverpool FC have reached agreement in principle for the transfer of Javier Mascherano, who will join the club for the next four seasons.

The agreement was reached after considerable effort from the club over the last few hours and the willingness and desire of the player to make the move.

FC Barcelona will give more details of the operation once the player has gone through his medical and the transfer is definitive. Javier Mascherano is expected to arrive in Barcelona this weekend. 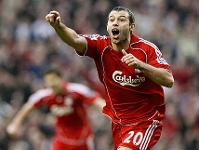