Ronaldinho was given a commemorative award to thank him for his contribution as a Barça player by the club's president Sandro Rosell.

The Brazilian was honoured by the fans before the Trofeo Joan Gamper game against AC Milan on Wednesday and was delighted with his return to Camp Nou. "There is no way to explain it," Ronaldinho told Barça TV. "So many memories in only as few seconds and I have so many friends. I felt so many great emotions." 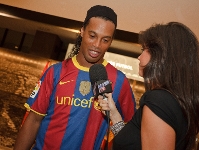 Before kick off the two teams lined up while Ronaldinho remained in the tunnel and a video of his best moments as a Barça players was shown on the giant video screens in the stadium. "When you see a video like this with all the fans in Camp Nou waiting for you it is like being in a film," the star continued. "I did not expect things to be so great." 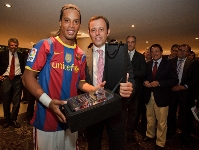 In minute 76 of the match Ronaldinho was substituted and once again the Camp Nou rose to their feet to give him a huge cheer. When walking off he lifted his AC Milan shirt to reveal a t-shirt with the message 'Barça I love you' written across the front. "I just wanted to thank people and Barça," he said. "What I wrote on the shirt is true, I do love Barça."

When Barça skipper Carles Puyol received the Trofeo Joan Gamper he invited Ronaldinho over to hold the cup. "The players gave me the trophy," the Milan player said. "The homage they paid is normally reserved for players who are no longer alive. They have done it for me in person and it has truly touched me. I had the chance to play with great player and that helped me do what I did and to start such a great era for Barça." 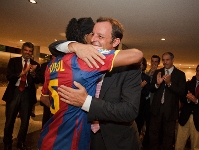 Once the fans had left the stadium and Ronaldinho had changed he went up to the directors' area where Rosell and several board members met him to hand over a commemorative award. "I have a completely different relationship with [Rosell]," he said. "He is my friend, my brother and the one who brought me here. I am pleased that he is in his rightful place as president of Barça." 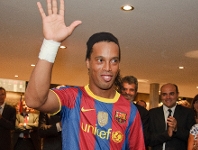 President Sandro Rosell presented Ronaldinho with the commemorative award with the inscription 'with great affection in recognition of your exemplary sporting career wearing the Blaugrana colours' inscribed on it.