“When you’ve tasted victory, you never want to stop winning"

“When you’ve tasted victory, you never want to stop winning"

Despite the success he’s achieved, Gerard Piqué, who will soon be back at the Nou Camp after his summer break, remains ambitious: “the future is there to be written. We will do everything possible to keep it as successful as it has been”.

Gerard Piqué was speaking at the inauguration of the new Penya Blaugrana Piqué in Sant Guim de Freixenet (La Segarra), where he insisted: “I’m excited and keen to get back with my teammates. When you’ve tasted victory, you never want to stop winning”. 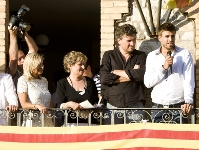 It’s been an astonishingly successful two years back at the club for Piqué, but he’s still demanding more and sees a great future for the club. He saw the game in Oslo and reckons: “the youngsters played really well. Step by step they are getting their chances and showing that the team can count on them”.

Piqué’s grandparents are from Sant Guim and during his visit there the Barca centre half signed the town council’s roll of honour and accompanied by the Mayor, Pere Solé, board member Pilar Guinovart and the supporters club President Maria Llorens, he spoke to the local crowds from the Town Hall balcony, remembering the time he spent in the village as a youngster.

Afterwards, he officially opened the supports club and had supper with the members. 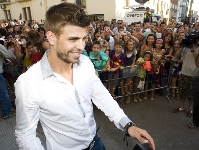