7 days of intense activity in Asia

7 days of intense activity in Asia

Barça leave for Asia on Sunday, where for one week Guardiola will be combining training with two friendly matches and various institutional and commercial duties.

Although they’ll be thousands of kilometres from the Ciutat Esportiva, Josep Guardiola will not be forgetting the team’s fitness and so work will be carrying on as usual despite being in South Korea and China. 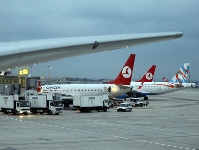 The FC Barcelona expedition leaves for Seoul on Sunday at 4.00. They will be using the club’s airline and spondor, Turkish Airlines. It is their first flight with this company since the World Clubs Cup in Abu Dhabi.

The flight to Seoul will take 12 and a half hours. When they reach the Korean capital, they will be transferred to their hotel and will later give a press conference ahead of the fixture with the K-League All Star team. The first training session should be in the late afternoon.

Preparing for friendly number one 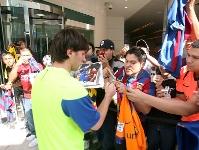 On August 3, the activity will be more intense. They’ll be having a double training session, one in the morning and one in the afternoon, the latter in the Sangam World Cup Stadium, the venue for the game on Wednesday. It kicks off at on August 4 at 20.00 (at 13.00, CET). Guardiola also plans for there to be a training session on the day of the match.

With that game concluded, Barça will be jetting off to China, where they have a busy schedule. On Thursday, there will be a press conference ahead of the match against local outfit Guoan FC. 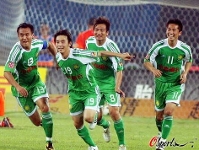 Guardiola, unless there are any late changes, will be holding six training sessions in Beijing before the game in the Bird’s Nest Olympic Stadium. There will be two sessions every day apart from Thursday and Sunday, with the team preparing for the second match, which will be against Guoan at 20.00 (les 14.00, CET). Once the game is over, FC Barcelona will be heading back home, arriving in the small hours of Monday morning.

The time difference between Barcelona and Seoul is 7 hours, and with Beijing it is 6 hours. 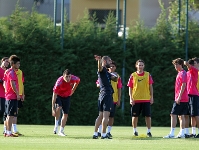 Like on previous tours, FC Barcelona will be combining the football with other duties. There are activities scheduled in association with Nike and Audi, both involving the first team. The club’s new sponsor, Herbalife, will also be involving first team players in promotions. Messi will be meeting a group of vulnerable children in Seoul in an activity promoted by Herbalife.

Meanwhile, the Catalan Tourism Board will be taking advantage of Barça’s presence in Asia to organise a series of joint actions.