Abidal: "I was really keen to get back"

Abidal: "I was really keen to get back"

After his unpleasant experience in South Africa, Abidal is pleased to be back in training with Barça. Now, he wants to put the World Cup behind him and focus on winning medals with FC Barcelona.

Abidal is keen to put his unfortunate experience with France in the World Cup behind him and focus on FC Barcelona: “I was really keen to get back to training with Barça. I missed it a lot. I enjoy training with Barça much more than with France. The sessions were really long and physical”.

Abidal returned to training this week and is eager to play, whether it’s at fullback or at centre half: “I’ve played at centre half for France although I prefer playing at fullback. We’ve signed Adriano, who can play on either side of the defence or on either wing. I’m here to help and if Guardiola believes that I have to play at centre half then I’ll give it 100%”. 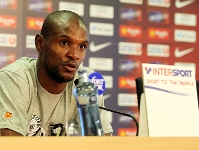 The French international is keen to put France’s World Cup fiasco behind him though he admits that it was a terrible experience: “It was a disaster but we have to close that chapter. We were all to blame, the players and the coach. The players tried to do things properly but the atmosphere in the squad wasn’t good either”.

Abidal revealed that he asked Raymond Domenech not to play him in the last match against South Africa: “I asked the coach not to play me in the last match as I wasn’t mentally prepared. It was better for the team not to play with ten men. It was all very unpleasant. There was a war between the coach and the press and perhaps the players paid the price”. Despite this bad experience, Abidal is not ready to give up his international career and says that he is available if new manager Laurent Blanc wants him.

Excited with the current squad 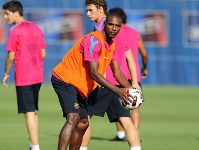 However, now he’s focussed on FC Barcelona and he is expecting great things from the current squad: “The manager is very intelligent and has put together a strong, competitive squad. Our strength is our winning mentality. We train flat out to try and win every match. We fight hard even if in the end we don’t win”.

Abidal is also upbeat about the contribution of the home-grown contingent. “There’s a lot of talent in the reserves and youth teams. I’m pleased to train with the youngsters and assess my level at 31. They’re all good enough to play for Barça”.

"Ibra is focussed to help"

Abidal believes that Ibrahimovic is as motivated and focussed as always and is convinced the Swedish striker will do a good job for the team: “He looks the same as always to me. He’s focussed in training and ready for a long season. He may have a bit more pressure on him because of the signing of Villa but it’s always good to sign a top quality player and have two first rate forwards. Then if he plays, great, and if not I‘m sure he has the mentality to help the team”. 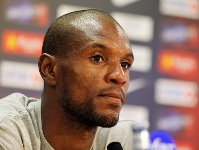 The victory of the Barça style

Abidal is happy that his Spanish international team-mates won the World Cup – for them personally and because it’s a vindication of the Barça style: “When you watch Spain you can see the Barça style. Calm, technical football and great forwards like David Villa to score goals – what a piece of luck that we signed him. I was very happy about their victory and about Iniesta’s goal”.