Team captain Carles Puyol put in an appearance at the Club’s training grounds on Wednesday morning to say hello to his team-mates and watch the session. 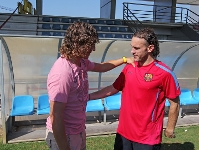 lthough the World Cup contingent are still officially on holiday, some of them just haven’t been able to resist the temptation to follow some of the pre-season preparations. This Wednesday it was the turn of team captain Carles Puyol.

Carles Puyol was treated to a warm reception by both players and coaches as this was the first time he’d visited the training grounds since winning the World Cup. Among those present was new goalkeeping coach Carles Busquets, who recently replaced Juan Carlos Unzué. 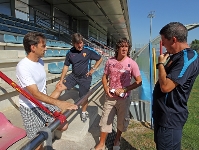 The internationals still have a few days to go before they are required to report back for duty but it’s clear that they’re all raring to go! On Wednesday it was Carles Puyol who showed his face around the training grounds while on Tuesday it was his central defensive team-mate Gerard Piqué. 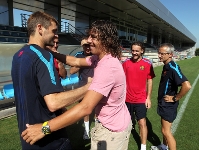 No rest for Puyol

Although he’s still on holiday, Carles Puyol is not neglecting his physical fitness. Earlier this week he announced via Twitter (www.twitter.com/Carles5puyol) that he is following a personal training regime in order to arrive back at the Club in top form.