Jeffren: “I have a place at this club”

Jeffren: “I have a place at this club”

Although he’s well aware of the tough competition for a place in the Barca front line this year, Jeffren Suárez is ready to start the season determined to win Guardiola’s confidence and earn himself more minutes on the pitch to show his quality.

This is Jeffren’s second season in the squad, after Guardiola brought him in from the B team at this time last year and the young Canary Island player is happy with the chances he’s been given so far: “I didn’t expect to get so much game time” , he explained.

There’s going to be enormous competition to win a place in the forward line in Guardiola’s team this season and the youngster admitted: “it’s going to be tough with the signing of Villa and the quality the rest of the forwards have, but I’m excited about the new season and I believe I have a place at this club”. 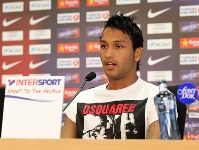 The pre-season is a good time for players who don’t always get game time during the rest of the year to shine and show their worth and Jeffren is determined to make the most of his opportunities: “the boss can give you more time in these games and I want to enjoy them and take my chances, so that he can see that he can trust me to do a job in any game he needs me”.

Guardiola and Jeffren also worked together at Barca B when they got promotion and Guardiola has shown since moving up to the first team job that he has great confidence in the club’s youngsters, something that Jeffren believes gives the young players at the club an enormous boost: “I feel privileged. He has shown that he trusts in the players coming through and that’s why we are all improving and reaching a high level, it gives you a really exciting feeling”. 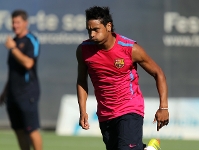 Of all the young reserves that Guardiola has brought through, Pedro is perhaps the most impressive, having moved from Third Division to World Cup winner in just two seasons and Jeffren revealed: “he’s an example to us, with everything he’s done and where he is now. I want to get to that level –and I will!” 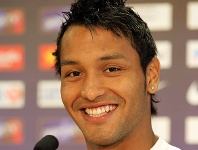 From his first campaign with the first team squad, Jeffren reckons that the game against Estudiantes de la Plata in the World Club Cup in Abu Dhabi, in which he featured and had the chance to savour the victory, is the one that most sticks with him

Although he was born in Venezuela, Jeffren grew up in the Canaries and despite the Venezuela coach César Farias hinting that he might be interested in the youngster, Jeffren insists he’s not interested in playing for the land of his birth: “I took a decision a while ago with my family – I want to play for Spain”.