Henrique, another year with Racing

Henrique, another year with Racing

FC Barcelona and Racing Santander have reached an agreement for Henrique to remain on loan to Racing for another season.

Henrique Adriano Buss, 23, joined Barça from Palmeiras in the summer of 2008. He spent a season on loan to Bundesliga club Bayer Leverkusen before moving on to Spanish club Racing Santander, also on loan. He played 22 matches (21 of them the full 90 minutes) and scored one goal. He ended the season with an injury in his left knee.

He will now spend a further season at Racing, where coincidentally Barça will open their 2010 league campaign.

According to Board spokesperson Toni Freixa, Barça and Racing have not agreed an option to sign the player on a permanent basis. 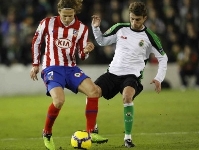