"We’re in debt to the fans and to ourselves"

"We’re in debt to the fans and to ourselves"

Brazilian defender Maxwell told a press conference on Monday that the players feel they are in debt to the fans after last season’s European semi-final exit against Inter Milan.

He also discussed the objectives for the coming season and assured reporters that Swedish striker Zlatan Ibrahimovic is looking forward to better things this season. He stressed that Adriano is a great signing.

In debt to the fans 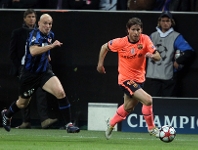 Maxwell emphasized that the players are aspiring to win every title on offer and are determined to make up for the Champions League exit against Inter Milan. Echoing the words of manager Pep Guardiola at the celebrations for the league title, he told reporters: “We fell at the final step and we had the feeling that we were in debt to the fans and to ourselves”. In 2011, the Champions League final will be held at Wembley, a place which holds very special memories for Barça fans.

He also spoke about Zlatan Ibrahimovic, with whom he shared the changing rooms of Ajax and Inter Milan before they both came to Barça: “He’s very motivated although it’s been a difficult year for him. He’s done some good things which people haven’t noticed but in the squad we know, and he’s training really well”.

2009/10 was Maxwell’s first season at the Camp Nou. He played 36 matches and improved on his first seasons with Ajax and Inter. He revealed today: “It was very positive because I accumulated a lot of matches, especially after Abidal’s injury. The league title, and the other three, made me very happy and motivated me to carry on the same way. I’m here to do my bit like everyone. I have to try and do more, the best I can, and stay fit and focussed”.

Adriano and the squad 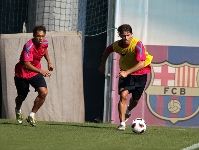 Far from seeing him as a threat for a place in the starting line-up, Maxwell is helping his fellow countryman Adriano settled down at the Club and in the city: “It’s great we’ve signed him. He makes the team more complete and in training I try and be with him to help him integrate. I want to help him and his family settle in here”. 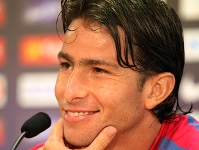 Finally, Maxwell spoke about Gio Van Bronckhorst, who retired from the game yesterday after the match between Feyenoord and Mallorca in Rotterdam. They never coincided on a football pitch but Maxwell explained: “When I was in Holland I always watched him when he played in international matches. He’s had a great career and has won a lot of titles. I liked the way he retired at his club. I wish him all the best”.