Barca start their second week of pre-season training on Monday, with their first match of the summer, a friendly against Valerenga set for this Thursday and the Asia Tour starting on Sunday.

The second week of pre-season training will be centred on the game against Valerenga in Norway and the start of the Tour of Asia, with the players flying out from Barcelona for Seoul on Sunday. The squad will train seven times in all this week, with two days of double sessions.

Monday, 26 July: After a day and a half break, the players are back in training at 09.00 on Monday, returning at 19-00 in the evening. Maxwell will give a press conference after the morning session. 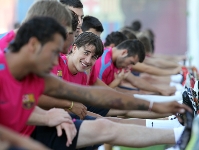 Wednesday, 28 July: Following a nine o’clock morning session, the players will have the afternoon free. 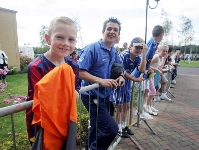 Thursday, 29 July: The squad will meet for breakfast at 08.00 and then set off for El Prat airport to take the plane to Norway. The team’s first pre-season friendly against Valerenga kicks off at 19.00. The squad will fly back after the game.

Friday, 30 July: After a break in the morning, the players will train at 19.00 and then have supper together at the Ciutat Esportiva with the technical staff, as they have done throughout the pre-season. 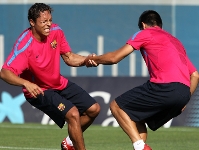 Saturday, 31 July: The 09.00 session will be the final training before the Asia Tour, with the players having the afternoon off.

Sunday, 1 August: The Asia Tour starts with the team meeting up at the Ciutat Esportiva, before leaving for El Prat at 15.15 and flying out to Seoul where they will play a K-League select team on Wednesday 4th August. The Tour continues with a friendly against Guoan in Beijing on August 8th. 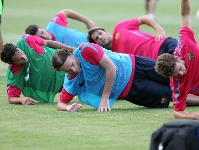 The week will also be marked by various events to celebrate the success of the various Barca players in South Africa. On Monday, Victor Valdes will be honoured at the Torre Lluc in Gava at 20.00, whilst Andres Iniesta will take part in similar events in Albacete and his home town of Fuentealbilla on Thursday.