There are now three ambidextrous players in the Barça squad. Adriano, Pedro and Villa can play with either foot, which adds to the tactical possibilities going into the new season.

We all saw what Pedro could do for FC Barcelona last season. The Canary islander can score with either foot, and that adds to the danger the team can cause up front. With Adriano and Villa now in the mix, this facet of FCB’s style will make an even greater impact. 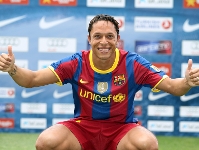 The fcbarcelona.cat website has discussed previous FC Barcelona players that can play with both feet. One of the most renowned recent cases was the left-footed Sergi Barjuán, who used his right foot to cross and score. “I was left-footed, but from very young my father made me use my right foot. I think ambidextrous players are created. It’s great for a team to have players that can do that. They are better than other in terms of tactics, anticipation, passing and positioning”.

For ‘Tente’ Sánchez, former player and FIFA agent, “Marcial was the best ambidextrous player I have ever seen … But clubs don’t especially go out to find such players. They look for players to play in a specific and specialised position. If they are ambidextrous, so much the better, but it’s not something that coaches worry too much about” he said.

Víctor Muńoz claims that “the best I ever saw was France’s Zinedine Zidane … I was coach for a year and a half at Zaragoza when Villa was part of my team, and Villa actually used his right foot much more. He did what he does now, playing on the left side of the attack so that he has the space to shoot with the right. He has got much better with his left foot.” 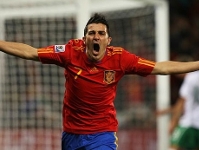 Everyone agrees that a pure left-footer will find it harder than an ambidextrous player. “Rivaldo, Stoichkov, Hagi and even Messi are pure left-footers, but you can’t ask much more of them, they do enough as it is”, says Sánchez. “Right-footed players have it better. It is a matter of training hard”, says Víctor Muńoz. “There are two theories, that which says young players should use the foot that suits them best, and those who feel they should learn to use both feet. It’s different for every child”.

For Sergi Barjuán, “ambidextrous players are mainly defensive, because they can find more solutions for difficult situations. Forwards are specialists, and know they have to make the most of their good foot”. 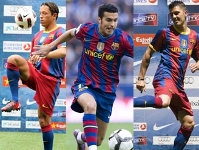 The three former Barça players agree that having such players “is a basic part of modern football, because it means you can change things without having to make substitutions.” They also agree that “Messi can play anywhere in attack … if you are as good as the Argentinian is, being ambidextrous is not important”.