Ibrahimovic to play for Sweden again

Ibrahimovic to play for Sweden again

Zlatan Ibrahimovic has confirmed that he will come or international retirement to play football for Sweden once again.

Eight months ago the FC Barcelona striker announced his decision to quit playing for his country, but has now decided to reverse that and told reporters of his choice in a press conference in Malmo on Friday.
Accompanied by new Sweden coach Erik Hamrin the striker revealed that he would be the new captain of the national team.

Explaining his reasons for returning to the Sweden fold Ibrahimovic stated: “After the last game when we did not qualify for the World Cup Finals I lost a bit of the desire and my motivation disappeared. But I do miss playing for my country.”

The first game that Ibrahimovic will participate in upon his return will be against Scotland in Stockholm on August 11. 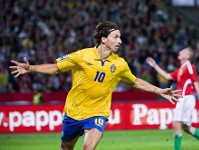 Zlatan Ibrahimovic has played 62 times for Sweden and scored 22 goals.