‘Monsieur’ goal and King of Europe

‘Monsieur’ goal and King of Europe

Thierry Henry is bringing three triumphant years at Barça to an end. His graceful runs and goalscoring instinct have played a central role in the successes of recent seasons, especially in the 08/09 Champions League campaign. 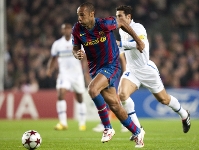 ‘Titi’ Henry was the big-name transfer of the 2007 close season. Renowned worldwide for his intelligence, elegance, skills and efficiency, the Frenchman had just completed eight amazing years at Arsenal in which he won almost every title on offer at both club and international level. But he came to Barça with an eye to winning one of the few titles that still eluded him: the Champions League. In 2006, he had come close in Paris, but it was Barça who got the better of the Gunners in the final.

Henry soon discovered that the direct route approach employed by the Londoners was far removed from the way Barça like to do things. For a start, under Frank Rijkaard he was going to form part of a trident of strikers, and the Dutchman opted to move Henry out to the right wing to make use of his speed and skill. 2007/08 was a fine season for the Gallic international, who posted 19 goals and was the club’s top scorer in all competitions. But the season ended without any major trophies.

The best of Henry 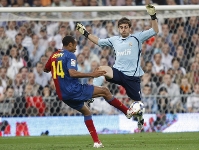 The following season, Pep Guardiola took Rijkaard’s place on the FCB bench. The Catalan had every respect for Thierry’s skill and experience and made him a regular part of his attacking plans alongside Eto’o and Messi. ‘Titi’ particularly came into his own on the European stage, and also scored a hat trick against Valencia (4-0) and excelled in the legendary 2-6 at the Bernabéu. He scored twice on that magnificent May 2, 2009, but also picked up a knee injury that almost put an early end to his season. But he was back in time to play in Rome, and against Manchester United he finally won the Champions League medal he craved. 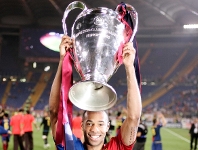 The treble winning 08/09 season saw Henry add to his admirable honours list the Spanish Super Cup, the European Super Cup, and the Clubs World Cup. Though he continued to have knee trouble, he still managed to hold down a first team place for the first half of the season, but later on in the season the emergence of an inspired Pedro meant he spent more and more time on the bench. Guardiola preferred to use him to stir up danger in the latter stages of matches, sometimes as centre forward, and in total Henry contributed four goals to the second league championship in a row. 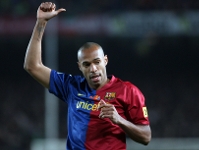 Thierry Henry is leaving. By we shall never forget his galloping runs down the wing and especially the trademark swerve he can apply to the ball, and which causes so many problems for opposing goalkeepers. It was that way that he scored some of his most memorable goals in a Barça shirt, including that terrific strike in the Champions League campaign of 2007/08 in Glasgow and three class goals at the Bernabéu.