The celebrations for the Club’s fourth Champions League trophy reached their climax at the Camp Nou this evening, as the players came out onto the pitch with their League and European trophies in front of an ecstatic crowd. 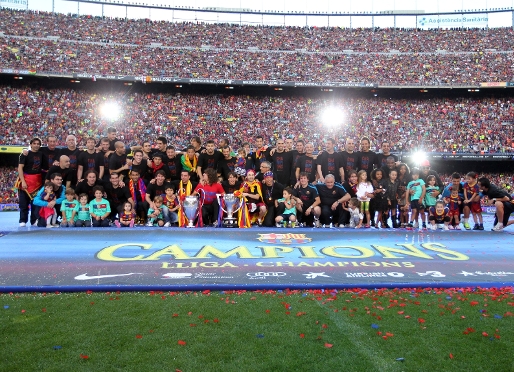 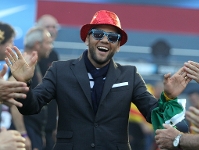 The stadium had been full for hours and there were thousands outside too, unable to get a ticket to see the players as they arrived. At 20.30, after their parade through the city streets, they walked out onto the pitch with the League and Champions League trophies.

It was very similar celebration to that held for the league title, with the players coming out onto the pitch one by one in the order of their short numbers. Busquets was doing summersaults and Alves was dressed up with glasses and a hat. Finally the four captains carried out the league trophy and then the boss and his assistant brought out the European Cup. That’s when the crowd really went wild!

Thanks to the fans 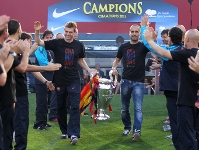 Captain Carles Puyol began the speeches, wearing a T-shirt in support of Miki Roqué. All eight players who spoke stressed the importance of the fans during the whole season. The obligatory photo in the middle of the pitch was followed by a lap of honour and a shower of confetti.

A spectacular firework display put an end to yet another great night of celebrations at the Camp Nou - now home to the Club’s fourth European Cup.