Newspapers around the world have succumbed this Sunday to the FC Barcelona exhibition at Wembley. Barça is unanimously considered to be the best team in the world. 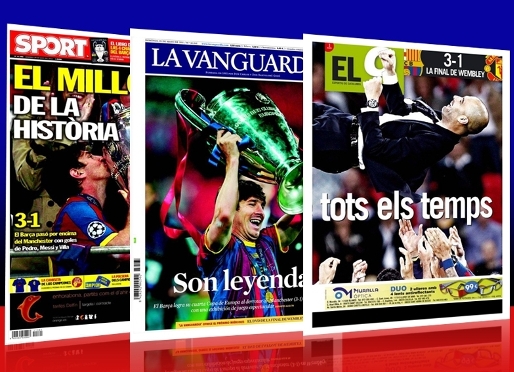 The British media had no problem recognising the Barça superiority over Manchester United. "The magical Messi sinks United”, was the Sunday Telegraph headline, and "Another Barça Masterclass" headlined The Guardian in its digital version.

"Trop Beau" (Too Good) was the headline in L'Equipe this Sunday, with Messi celebrating his goal. In Italy, La Gazzetta Dello Sport spoke about “FantaBarça”, with the sub-title “Goal, great spectacle, and Super Messi', while Corriere della Sera headlined with " mythical Barça"

In Argentina, Lionel Messi, MVP in the Final, is the undisputed star of the country's press. "Barcelona and Lionel Messi gave a feast of football”, wrote Clarin. In Ole, they accompanied a photo of Messi and the Champions trophy with "Beautiful Child”.

The state media all have Barça on the front cover. In La Vanguardia, "they are legendary” and El Pais reports "Barça were heavenly at Wembley”. Finally, Público has the team as "the greatest in Europe".