Barça had their official Champions League final training session today at Wembley. The players were able to train perfectly normally. 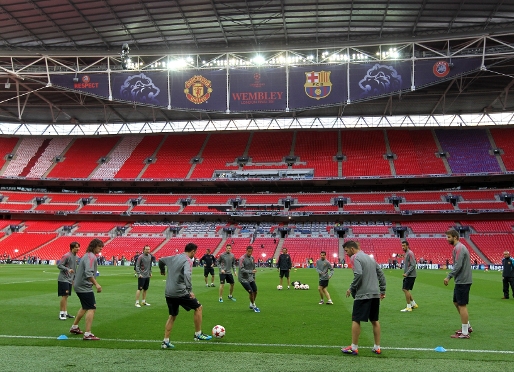 ‘We love’, the FCB mosaic

When the Barça players came out to train at Wembley, a group of Barça fans had gathered to present a mosaic that said ‘We love’.
Nineteen years after collecting their first ever Champions league trophy, FC Barcelona are back at Wembley as they seek to win the title for the fourth time. The stadium has been totally rebuilt since that game back on May 20, 1992, and today the players got their first chance to play on the field as part of their Champions league final weekend shared with Manchester United. 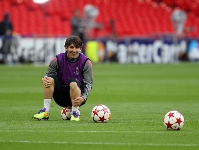 Having already trained on the Arsenal training ground, they moved their Champions League preparations to the match venue today. The atmosphere seemed laid back and joyful as the media watched their every move, but at the same time there were signs that everyone was fully concentrated on the task. This is the Champions League final, and not an experience to be taken lightly.

The sports director of professional football, Andoni Zubizarreta, was there to watch. Speaking to El Marcador on Barça TV the goalkeeper at the Wembley 92 final confessed that “the new stadium is nothing like the old one. It is enormous, spectacular and very modern. The old one conveyed all the classicism of English football”.

As for the change to Barça’s travel plans, which has meant the team has been together longer than originally planned, Zubi said “we have adapted to being here for more time. We assimilated it well”.