Messi: “it’ll be a different final from Rome”

Messi: “it’ll be a different final from Rome”

Leo Messi reckons this season’s Champions League Final will be a much more closely contested game than the 2009 Rome final. Messi also believes there are no favourites for the game, but that Barça are going into it full of expectation. 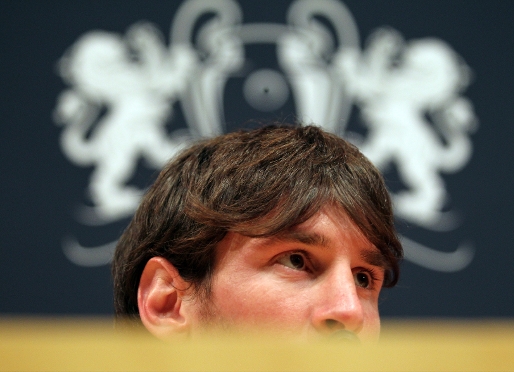 Messi has been fighting with Cristiano Ronaldo for the “Pitxitxi trophy as the Spanish League’s leading scorer, but finally it was the ex-United man who scored the most goals and Messi took the opportunity to congratulate him: “it’s true that I prefer team titles to individual awards, but I can’t hide the fact that being so close to getting the Pitxitxi, I would really have liked to win it. Congratulations to Cristiano though, who has scored a lot of goals in the last few games”.
Messi knows that the final of two years ago remains a great day for the Club, but insisted: “the good memories of Rome are in the past now. The Wembley final will be completely different “.

The Argentinean opened the Open Media Day press conferences by insisting the Rome final shouldn’t be taken as a pointer to this Saturday’s game: “we are up against a great team in a game that will be completely different. I don’t know if United are stronger than two years ago, but I am clear that this will be a very even final”. 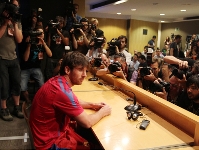 Messi praised United, who he claims: “are a team who like us, want to play with the ball, attack and create chances”, whilst pointing out the United defence: “are tough, with great players who have a lot of experience and have played together for a long time. They have a lot of good points and we will spend this week looking for their weak points, if they have any, and look how to exploit them”.

Messi also stressed that : “I don’t see United as being any weaker than in Rome –they’ve just won the Premier League and they are in the Champions League final. They have an attack with a lot of quality in players like Rooney, Chicharito and Valencia. I see them as a very tough team – a very difficult team to beat”.

Messi, who admitted he would have preferred to take part in the last few league games, is really looking forward to the final: “I’ll go out, like I always do, as if it was my last game ever . I always think we will win every game. I trust my team mates. We are all very excited and up for the game and if we play as we always do and do things right , we will win”.