Spanish League Round Up Week 38

Spanish League Round Up Week 38

Deportivo La Coruńa were relegated after losing 0-2 to Valencia , whilst Zaragoza beat Llevant and Getafe and Real Sociedad drew at Anoeta. Of the other teams involved in the relegation battle, Osasuna won and Mallorca lost. 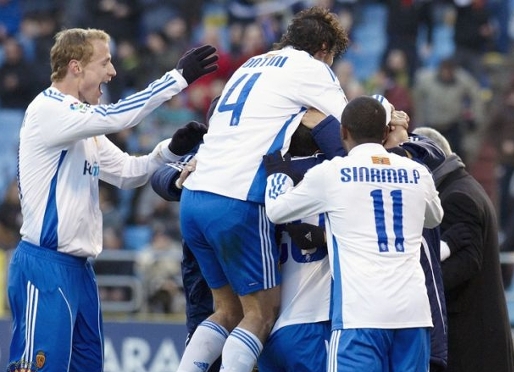 Espanyol’s defeat to Seville was also Ivan de la Peńa’s last game for the team, after he announced his retirement from the game. The ex-Barça man came on for the last 10 minutes of the game and was cheered off the pitch by fans and players alike as he put an end to a great career.
Just seven years ago, Deportivo were on the verge of making the Champions League final, but after Saturday night’s home defeat to Valencia, they will be playing second division football next season after 21 years in the top flight. Deportivo’s defeat, combined with Zaragoza’s win at Llevant and Getafe’s draw in Donosti, meant Lotina’s team ended the season on 43 points, one behind Mallorca and Getafe.

Once Aduriz had put Valencia one up early on, Deportivo desperately attacked to save their first division lives, but they were wasteful up front and Soldado finished them off in injury time with Valencia’s second. A draw would have sufficed for Lotina’s team with Mallorca losing at home to Atletico Madrid, but as their manager lamented: “we didn’t have a single drop of luck”. Deportivo were the league’s lowest scorers with just 31 goals and many might point to their lack of ambition as the cause of their downfall, though Lotina insisted: “there have been some strange results at the end of the season and it’s not logical that we should go down with 43 points”, whilst pointing the finger of blame at the controversial draw in Gijon at the beginning of the month.

Zaragoza began the day in 18th place, but they finished up in 13th after two goals from Gabi saw them beat Llevant 1-2 for their fourth win in the last six games. Getafe also survived thanks to a Cata Diez goal after just 9 minutes, which Sutil equalised in the second half. With the results from the other grounds favourable to both teams, the two played out the last 20 minutes at a gentle pace with neither side looking to rock the boat. Getafe end the season on 44 and Real on 45 points.

Three goals from Kun Aguero set the nerves on edge in Mallorca, as the islanders went down 3-4 to Atletico Madrid and were just a Deportivo goal away from the drop themselves for most of the game – had the Galicians drawn their game, Laudrup’s team, who had been challenging for a European spot for a large part of the season, would have gone down. As it was, their defeat meant they finished the season with just one win in their last nine games.

Osasuna were many people’s favourites to go down a few weeks ago, but their 1-0 win over Villarreal in Pamplona guaranteed a top ten finish as they chalked up four wins out of five in the final month of the competition and ended with the fifth best home record in the league, with just three defeats.

All the three Europa Cup teams won, with Seville beating Espanyol 2-3, with Negredo getting a brace to take his total to 20 and Bilbao defeating Racing 1-2 with Fernando Llorente getting his 18th goal of the season. That means that Seville finish fifth, Bilbao sixth and Atletico will have to play in the qualifying rounds of the Europa Cup in the summer.