“People shouldn’t expect me to score in the final”

Iniesta: “People shouldn’t expect me to score in the final”

The hero of Stamford Bridge is going back to London for the Champions League final. After starring in the Rome final and scoring the winner in the World Cup final, Iniesta says that “all I want to do is win. These things don’t happen all the time”.

Andrés Iniesta is having his best season ever. His goals and his football have been outstanding. Fans at stadiums around the country have applauded his talent. He couldn’t be feeling more confident going into his third Champions League final, which takes him back to a city that will always bring back fond memories. The stadium is different but the desire is the same: to win the cup again. Barça TV and www.fcbarcelona.cat have chatted with the player ahead of the final at Wembley on the 28th.

What memories do you have the European Cup as a child?
“The European Cup is a very special competition, very nice, where everyone makes a special effort. The fans too. I have always thought of it in a special way and I always feel fortunate to have been able to play in it and also win two titles”.

What do you remember of May 20, 1992?
“I don’t remember where or with whom I watched it, I was only eight years old. But I do remember images and moments, and what that meant for Barça, because it was our first European Cup”. 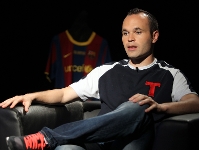 And the Dream Team?
“My heroes played in that squad: Guardiola and Laudrup. I liked that team because of the way they played, and of course I tried to be like them in the future”.

When you have met Laudrup, do you still feel the thrill of meeting one of your heroes, or do you lose that kind of thing once you are a professional?
“I have met him two or three times. And I still find it a thrill. I have a lot of respect for him, a lot of fondness. He was a reference for me”.

Is your team an improved version of the Dream Team?
“They are different times and different teams. We try to take the best out of every team, be that the Dream Team or any other. Our team is very complete in all senses and every year we develop in order to win more titles. We haven’t rested on our laurels, we have looked for new challenges, new ways of playing and new variants. The secret of this team is that we try to learn and improve every year”.

You are 27 years old and have played 70 Champions League matches. Can you remember the first?
“Of course. Away to Bruges. It was my debut for Barça and I didn’t play in the League until later. I remember it well, and a lot of the B team played that night. I was very nervous. It was the day that everything I had dreamed of at La Masia came true. It was a very intense, nervous day”. 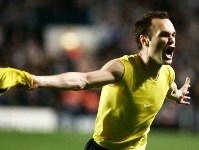 You have scored 6 goals in the Champions League. The most important was in London. Do you still feel excitement when you remember what happened at Stamford Bridge?
“Yes, and I think I always will. Every time I see it. For the moment and what it meant for everyone. It’s exciting to see it. It gives me goose bumps. I remember the moment, what I experienced and what came after”.

Do you think that goal finally made you a ‘great’?
“Personally, I’d rather think not. I think I still play more or less the same. I try to get better every day, but maybe it changed my on the outside, in terms of the media and press, just like the World Cup goal. But Andrés Iniesta the player doesn’t change just because of one goal or other. Iniesta changes through learning and becoming a better player, not because of one specific moment”.

Let’s look at your other finals. You were a substitute in Paris?
“Yes, it was one of the biggest disappointments of my career. I had started in the quarters and semis. And I think everybody said I’d played really well. It was a big shock. I didn’t expect it. But I felt that if I did get on the pitch, I’d have to give it all I had, and in the second half I did get on and everything changed. But that decision hurt me a lot”.

Did you speak to Rijkaard?
“Yes”.

Did he resent making you substitute?
“No. He never did. No coach does. They decide. We did speak, but it stays between us two”.

But it didn’t stop you having a great second half and you set up the move for the equaliser?
“Just because I felt like that doesn’t mean I wasn’t happy to win the European Cup or to play the second half, it was just the way I felt”. 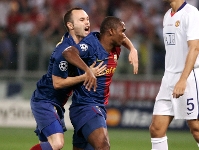 You were practically injured for the Rome, final. How were those 15 days?
“A race against time. It was difficult because we also the Copa del Rey final and I couldn’t even travel. It was all very intense, but I was sure I’d be fit in time to help the team. I wasn’t one hundred per cent but I was happy to be there, and to have helped to win the Champions League. All effort gets its reward”.

You paid a tough price, but would you do it again?
“Of course, I love this club. I love my team mates, football is my life and I’m sure I’d do the same again. But the toll I paid was pretty tough”.

You have played everything this season. And you’ve scored 9 goals, Is that because of fitness or confidence?
“It’s been my best season to date. Individually and as a team. You gain experience and confidence over the years. When you get continuity you feel faster. It gives you maximum confidence and things you tried before but didn’t work out do start working out. It’s nothing just specific, just the moment itself”.

By the way they have played in the Champions League, is Barça v Manchester the best game you can see right now?
“Maybe. I am certainly sure that these two teams are here because we deserve it. There’s no doubt about that. We are two teams that like to play football. They have done the same in their league and won it. They have always made finals in recent years. It’ll be a good game”.

Does this Barça play better football than in 2009?
“Yes, because to keep winning we have had to improve, evolve, and I think we’ve done it. We have improved a lot”.

Can we take the final two years ago as a reference for the 28th?
Every game is different, but Barça haven’t changed. We always play our way, holding onto the ball, trying to create chances and minimising their virtues. They are also a better team than they were in 2009 so we’ll see what happens. They don’t play teams in their league that dominate possession so much. It’ll be a good game, Manchester have a great team”.

They say they are better, even though the block is the same, without Cristiano and Tévez.
“Yes, I think they’re strong. They have changed players and that has distributed the responsibilities more, other players have bigger roles in the team”. 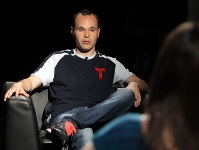 What do you most like about United? Or dislike?
“The team. They’re very compact, especially against a difficult team, because they defend well and have fast players on the counter attack, they’re very consistent, they work hard for the whole match. When you face Manchester in a Champions League final, you have to be wary of anything”.

Are Giggs and Scholes models for you?
“They’re living legends. They have played an infinity of matches, they have broken all the records, titles and moreover they show what true pros they are in every game they play. They are veritable examples for us and all young people that want to make it one day. There is so much to be learned from them”.

How will the team approach the 28th?
“We’ll arrive in good form. I’m convinced. It helps to go into the Champions League final in such good shape. But the league, with Madrid dropping so few points, did seem very long. We’re a bit saturated by the league. So the next few days will be good for getting back to prime condition”.

Can you imagine yourself scoring in the final?
“To be honest, I haven’t thought about it and I hope the fans don’t either. There have been two precedents, the one at Chelsea and the World Cup final. And even if we’re drawing, I hope people don’t expect me to score, that’s doesn’t happen very much. I only want to win, not to be the protagonist. I just want to win the Champions League and come back to Barcelona to celebrate it”.

Have you got any promises if Barça win the Champions League? Because you still haven’t done what you promised to do if you won the World Cup.
“I haven’t had time (laughs). I never said I’d do it right away. I haven’t thought of anything this year, but it would be wonderful if we could win it”.