Julio Salinas, the FC Barcelona striker at Wembley recalled that he hadn’t expected to play in the 1992 Final. "I wasn’t getting many games" he explained, and highlighted the importance of the match in Kaiserslautern.

The Barça TV program “Wembley Heroes”, which premieres this Wednesday at 23.00, brings together three of the players who started in the 1992 Fiinal, Eusebio, Julio Salinas and Stoichkov, who look back at before, during and after the match against Sampdoria.

The case of the Basque striker is certainly the most surprising of the three. Salinas was far from being a fixture in the Cruyff side: he played in 17 league games before Wembley, and had only played in 6 games in the European Cup, and only two of them as a starter (against Hansa Rostock and Sparta Prague, losing both games).

Cruyff to Salinas: "Don’t go out so much at night" 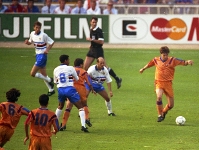 The surprise, then, came on the Friday before the final, when Johan Cruyff told him that he would be playing in the match: "I remember that I hardly played, that I wasn’t selected very often. The boss called me on Friday and said he wanted to talk to me, and he said, "I want to tell you that you’re playing in the final". I replied: "What?" And he said, "I’m telling you now because you know that this weekend you’re not selected. More than anything, I’m telling you so that you don’t go out so much at night". I thought he’d lost the plot. Julio Salinas played the first 65 minutes of that final.

"I don’t want to even see Pagliuca"

The final saw quite a few clear goal-scoring opportunities, one of which fell to Julio Salinas, who almost opened the scoring following an individual effort. Pagliuca pulled off an incredible save. "I don’t want to even see Pagliuca. I spoke with him by phone the other day and told him, half jokingly: "You wrecked my career." He replied: "I made some saves that day, but you won the cup!". Now, 19 years later, Salinas said that "if it wasn’t for Pagliuca my boot would be in the Museum.

Salinas recalls that winning the tie against Kaiserslautern in the last minute was crucial. "That was the win that gave the team the spirit that was missing at that time. Everybody was a critic. Barça, the national team ... It wasn’t like today where everybody is rowing in the same direction. I think that the team, after Bakero’s goal against Kaiserslautern, really got together and said “Let's go for it".

"That team was made to last much longer"

The final outcome is well known to everyone. Koeman decided the final with a goal from a direct free-kick in extra time, and the team ended up winning four consecutive league titles, and reached another European Cup Final two years later. There, they suffered a painful 4-0 defeat to AC Milan. "At that time, when we won the league and were off to the final in Athens, we just thought: "One more, one more". Now you look back and think maybe we should have put a bit more into it. That team was made to last much longer and win a lot more things than we did" Salinas recognised.